For those of you who might have missed it, Asian textiles got into the news last month when a royal Rajasthani tent was cleaned for the first time in over three hundred years. A totally unique textile, made in imperial workshops from red silk velvet and gold, unfurled it stands four metres high – as high as a London double-decker bus. It’s known as the Lal Dera, or the Shahi Lal Dera – the Royal Red Tent, and is believed to have been the home of Shah Jahan, the Mughal emperor who built the Taj Mahal.

To read the article in full, visit the BBC website.

The Chester Beatty Library in Dublin, Ireland, recently published a blog post all about the process of conserving a Chinese imperial dragon robe. It makes for fascinating reading, and includes lots of detailed photographs of the initial analysis of the textile and the subsequent conservation work involved.

Sir Alfred Chester Beatty collected eight Chinese dragon robes; it is thought that several came from the Forbidden Palace in Beijing. These magnificent robes were once worn by the emperors of the Qing Dynasty, 1644–1911, the last ruling dynasty of China. The robes tell a story of a vanished court life and were worn for important rituals as well as everyday occasions.

Over the last few years, a rolling programme of conservation has been undertaken to conserve all the dragon robes within the collection, to allow an annual rotation to coincide with the library’s celebration of the Chinese New Year. For anyone thinking of planning a visit, the dragon robe case is in the first floor ‘Arts of the Book’ exhibition gallery.

The blog focuses on the conservation of one of the three imperial yellow robes, which are of the highest quality yellow silk and feature exquisite embroidery.

The Pitt Rivers Museum in Oxford recently shared a blog post all about the work involved in mounting an elaborate eighteenth-century Tahitian mourning costume, ready for display. This enormous many-layered outfit, made mostly of barkcloth, but with additional decoration made from feathers and shells, forms part of the museum’s new Cook Voyage display case.

Best of all, the blog includes a stop-motion video of the mounting process, so you can watch how the whole thing was put together. It makes fascinating viewing!

To read the full blog post, and to watch a video of this costume being assembled on the mount, visit the Pitt Rivers’ Museum’s Conserving ‘Curiosities’ blog. 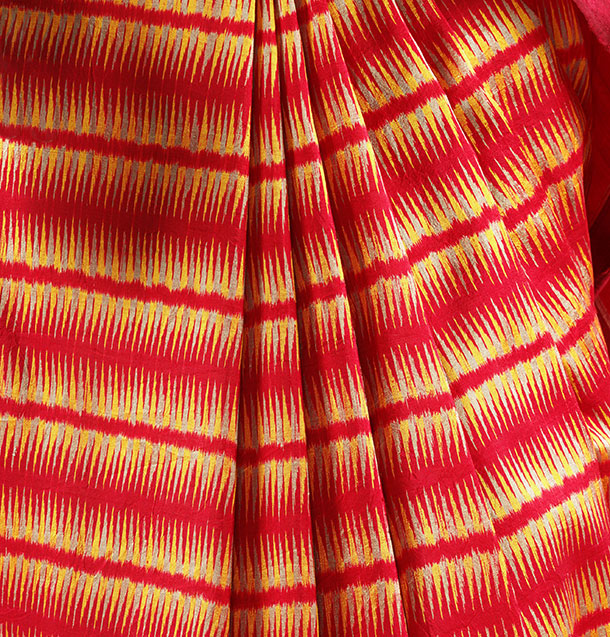 Today’s Textile Tidbit is a behind-the-scenes glimpse at preparations for the V&A’s upcoming ‘Fabric of India’ exhibition, which opens on 3 October. You may already have been following the exhibition’s blog, but if not, here are two fascinating posts that give a great insight into how the exhibition was planned and prepared for.

Firstly, curator Rosemary Crill describes in her post, ‘The Reject Files‘, how she initially selected the textiles to be included in the exhibition, and how she decided which ones to exclude. It’s interesting to hear about the objects that didn’t make it through the selection process, and how the decisions were made.

And secondly, from further on in the preparation process, the V&A’s textile conservation team wrote a post entitled ‘Slippery Sagas and Delightful Draping‘, about the troubles they had coming up with a method for draping saris on mannequins to go on display. The whole process sounds fairly entertaining from a spectator’s point of view, but I’m sure it was tricky and frustrating for those involved!

I hope you enjoy reading these as much as I did, and that they whet your appetite for the exhibition itself. Not long to go now! And if you’d like to read more blog posts about this exhibition in the meantime, you can find the entire series here.