“Whatever manufactured items there are in the world,” wrote the Ottoman traveller Evliya Çelebi in 1671, “the poor of Cairo get hold of them, set them out and trade in them.” Nearly 350 years later, this tradition lives on in al-Darb al-Ahmar. This neighbourhood of 100,000 people, south-east of central Cairo, is said to be home to a thousand workshops. The place teems with artisans crafting everything from tents, books, boxes and brass lanterns to glass bowls and silk carpets.

The Street of the Tentmakers captures this commercial spirit. Built in 1650 as an arcade, this covered street is a succession of workrooms whose interiors are lined with decorative textiles. From his cubic cavity in the Ottoman-era wall, a weaver called Hasan says that al-khayyamiya, the craft of tentmaking, goes back to the time of the pharaohs. Some of today’s weavers are descended from the families who would produce the kiswa, the fabric that covered the great stone at Mecca, as well as tents, cloths and saddles for those setting out on pilgrimage to Islam’s holiest site.

This article gives an excellent overview of this district of Cairo with its weavers, dyers, bookbinders, carpet makers, glass blowers and lantern makers, explaining how many of the buildings have been restored with the help of the Aga Khan Development Network.

To read the full article visit the website of the Guardian

A free exhibition of photographs entitled The artisans of al-Darb al-Ahmar: life and work in historic Cairo is also taking place from 23 March – 24 April at the Royal Geographical Society in London. 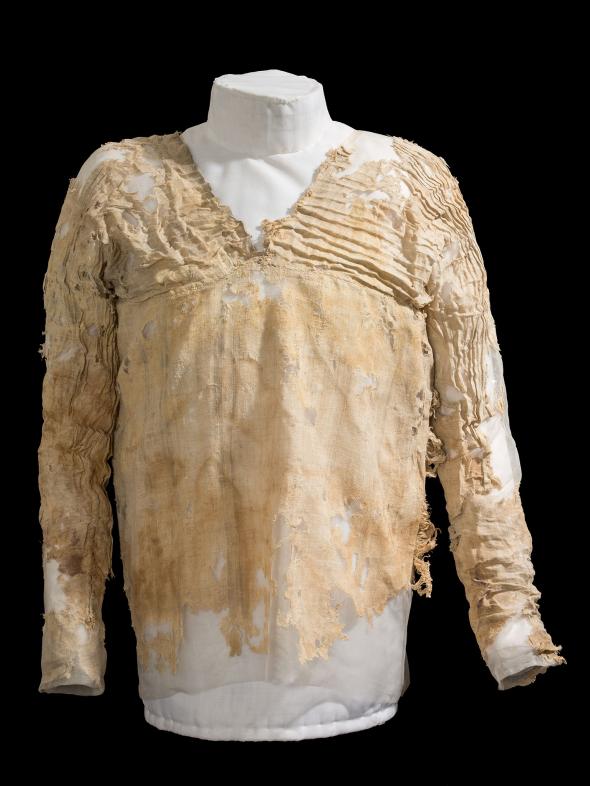 An Egyptian garment has been unveiled as the world’s oldest dress after radiocarbon dating confirmed it was up to 5,500 years old.

The Tarkhan dress was sent to the Petrie Museum of Egyptian Archaeology at University College London in the early 1990s after being found in an Egyptian tomb. Left in a bundle with rags, it was only in 1977 when experts found it by chance.

Radiocarbon dating by the University of Oxford last year confirmed that the dress is between 5,100 and 5,500 years old.

For more information, visit the Independent website or the Petrie Museum website (which includes instructions on how to make your own Tarkhan dress!).

Discover Egypt’s incredible journey over twelve centuries, as Jews, Christians and Muslims transformed this ancient land. It is a story charting the change from a world of many gods to the worship of one god.

The exhibition begins in 30 BC, when Egypt became a province of the Roman Empire after the death of Cleopatra and Mark Antony, and continues until AD 1171 when the rule of the Islamic Fatimid dynasty came to an end. The remarkable objects in the exhibition have been uniquely preserved in Egypt’s arid climate, and many have never been on display before. Their survival provides unparalleled access to the lives of individuals and communities, and they tell a rich and complex story of influences, long periods of peaceful coexistence, and intermittent tension and violence between Jews, Christians and Muslims.

The state’s use of religion to assert power is shown by fabulous sculptures that mix ancient Egyptian and Roman imperial iconography, and letters on papyrus concerning the treatment of Jews and early Christians. Gravestones and architectural elements demonstrate the reuse and reworking of sacred spaces – temple complexes were reused as churches and, later, mosques.

The changes in people’s private lives are shown through everyday objects – delicate fragments of papyrus preserve some of the earliest surviving Jewish scriptures and lost Christian gospels. Colourful garments and accessories show what people wore, and soft-furnishings show how they dressed their homes. A particular textile highlight of the exhibition is an extraordinary pair of Coptic door curtains (see detail pictured above). These were reused as a burial shroud, hence how they have survived until now.

Together, the objects in the exhibition show how the shift from the traditional worship of many gods to monotheism affected every part of life. Egypt’s journey from Roman to Islamic control reflects the wider transformation from the ancient to medieval world, a transition that has shaped the world we live in today.

For more information, visit the website of the British Museum, London.