This video documents the process of weaving a patola in Patan, Gujarat. There are so many stages to this process, but when you watch them cutting open the bindings your heart really is in your mouth – just one slip and all of that work would be ruined!

Note the precision with which they are adjusting single threads at the end of the video.

Today’s Textile Tidbit is a link to a textile designer and researcher’s blog post all about her experience of learning to weave in Kutch, Gujarat. The Travels in Textiles blogger spent three weeks in India last December learning about all the steps involved in the process of weaving traditional textiles and it’s a fascinating read. Click here to read her blog post.

Somaiya Kala Vidya is the organisation that offers courses in traditional textile crafts in Kutch, including weaving, block printing, batik, embroidery and many others. It looks like a fabulous place to learn, surrounded by expert artisans. I think I would like to go for a whole year and study everything! 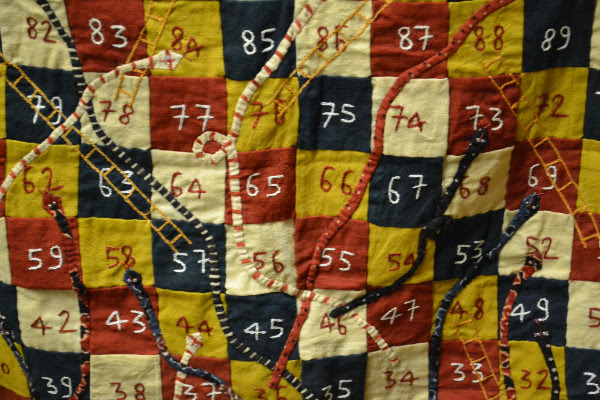 It’s now a little late in the month, but there’s been quite a deluge of wonderful textile material for the blog recently, and I wanted to share SADACC’s wonderful object of the month with you before it’s too late. (Some of you may have seen this already if you subscribe to the SADACC newsletter – apologies for reposting if so.)

Sap sidi (snakes and ladders) is a popular game in Jain, Hindu and Muslim cultures. Snakes and Ladders originated in India, possibly as early as the second century BC. Early versions were known as Moksha-Patamu (heaven and hell) and the game works on the principle of good versus evil.

Cloth games have been made since the Mogul era and are often included in a girl’s dowry. The board is a miniature patchwork quilt of vegetable-dyed fabric. It was made by female artisans in Kutch, Gujarat. These women are descendants of a nomadic tribe from Nagar Parkar, in the Sindh region of Pakistan. Elderly women typically turn to patchwork from embroidery when their eyesight begins to fade. 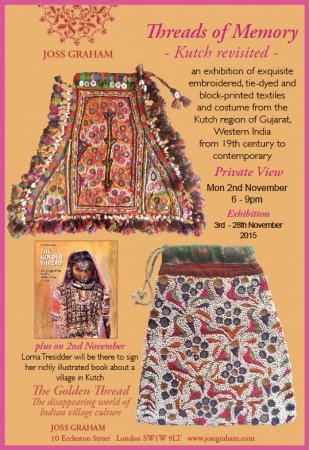 Joss Graham’s autumn exhibition is dedicated to the magnificent textile traditions of Kutch, Western India. Featuring folk embroideries, appliqué and beadwork, festive wall hangings, tie-dyed silk shawls and block-printed cottons, it promises to be a feast of colour and craftsmanship.

The exhibition will be held at the Joss Graham Gallery, 10 Eccleston Street, London, SW1W 9LT

For more information, visit the website of the Joss Graham Gallery, London.