Shortly after posting my most recent blog I was contacted by designer and anthropologist Charlotte Linton with an update on her research into textile production on the Japanese island of Amami Ōshima. Along with several other OATG members I attended an excellent presentation and workshop by Charlotte at Wolfson College in Oxford last year.

Charlotte spent one year in Amami Ōshima, during which she explored “how traditional craft industries navigate the paradox between preservation and innovation”. The main cloth produced there is tsumugi for kimono. This is dyed using a process known as dorozome, which involves mud (as a mordant) and the boiled wood of the local hawthorn tree. The production of these cloths is very labour-intensive as it involves at least 28 separate processes. In her new paper Charlotte discusses the future of these textiles from her experiences working in Kanai Kougei – a traditional family business there. She looks at the implications the conferring of Mukei Bunkazai (Intangible Cultural Property) status would bring to these textiles, and the fact that it may mean stagnation rather than innovation. This is examined in the context of the current interest in sustainable fashion. “Making It For Our Country”: An Ethnography of Mud-Dyeing on Amami Ōshima Island appeared in the journal Textile: Cloth and Culture and is available here. I highly recommend taking the time to read this. The OATG are hoping to persuade Charlotte to come and talk to us about her findings in the future. Watch this space for details!

Below I am reproducing some of a blog I wrote on this subject last summer, simply so that readers can have all of the information in one place:

An excellent article by Martin Fackler on the economic issues facing the kimono producers of Amami Oshima appeared in The New York Times in 2015. He describes how 20,000 people were once employed in this profession, but that number has now shrank to 500. His article ends with the following words from Yukihito Kanai:

“We need to become more like artisans in Europe or artists in New York,” said the younger Mr. Kanai, 35, who said he is one of the few “young successors” in the island’s kimono industry. “Even traditions have to evolve.” 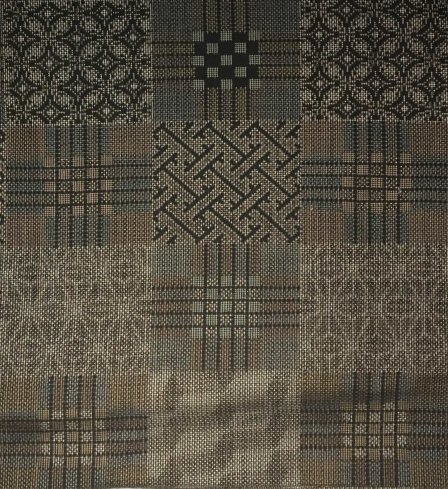 An example of a tsumugi textile from Amami Ōshima. ©David Richardson

The production of a kimono on the island of Amami Oshima is so meticulous that a single mistake could squander the efforts of every artisan in the process. The BBC series Handmade in Japan tracked the year-long transformation of the island’s famous mud-dyed silk into an exquisite garment. Although the full-length programmes are no longer available online, short video clips still are. These cover the various people involved in making a kimono – the starcher, the designer, the binder, the mud-dyer, the weaver, the inspector and the tailor. They can be viewed on the BBC website under the title Mud, Sweat and Fears

For more information on mud dyeing (more correctly mud-mordanting as it is the tannin which produces the dye) see the work of OATG members David and Sue Richardson on their Asian Textile Studies website. David and Sue have now also documented the process of mud-dyeing used by the last major practitioner of this craft on the Indonesian island of Sumba.

A new 6 part documentary series on the V&A called Secrets of the Museum began on BBC2 last night. The series looks at the work of the curators and conservators as they handle a wide variety of different objects, ranging from Queen Victoria’s coronet to a Dior gown. The star of last night’s episode for me was Pumpie the Victorian elephant. It was fascinating to see just how much work went into his conservation, right down to dyeing lots of samples with which to repair his trunk. Looking forward to future episodes….

Details
Secrets of the Museum
6 February BBC 2 at 2100

Demonstration of how to fold a kimono collar. © Staphany Cheng.

Also on the subject of conservation is this interesting blog by Staphany Cheng, Andrew W. Mellon Fellow, Textiles, Conservation Center, Los Angeles County Museum of Art., in which she shares her experience of participating in the Workshops on the Conservation of Japanese Textiles, held in Taiwan. Much of the emphasis seems to have been on kimono. I had no idea there were three particular ways to fold these garments!

The Seattle Asian Art Museum finally reopens this weekend after a major project to renovate and expand it.  The next event in their Saturday University series is a talk entitled The Dragon and the Pearl: Explorations of a Eurasian Motif by Joel Walker of the University of Washington.

“The art and literature of medieval Eurasia abound with stories of precious jewels guarded by monstrous serpents or dragons. This presentation will investigate iterations of this motif in the Syrian Christian tradition, including a famous stele from the Tang-dynasty capital of Xi’an in northern China and a silver reliquary fragment from Roman Syria. Taken together, these artworks reveal the powerful symbolism of pearls as markers of spiritual excellence.” Seattle Asian Art Museum website.