In Southeast Asia, textiles are often made by women for the purpose of donation to the local monastery; the textiles are then displayed in monastery buildings or on their grounds. The donations bring the women merit, which is important for Buddhist practice. These displays also give the women a chance to show off their weaving skills and have their work appreciated by others. This talk by Rebecca Hall will concentrate on Buddhist textiles in mainland Southeast Asia, with specific attention paid to the countries of Thailand, Laos, and Cambodia, and is held in conjunction with the just opened exhibition, Ceremonies and Celebrations which she curated. The focus will be on Buddhist banners, their form, and meaning, but will also include other kinds of textiles made and donated at monasteries. The motifs and scenes woven into the textiles are related to Buddhist beliefs and popular stories and help provide insight into the beliefs of laity across the region.

This event is run by the Textile Museum Associates of Southern California, but it is also open to non-members – museum admission fee applies. 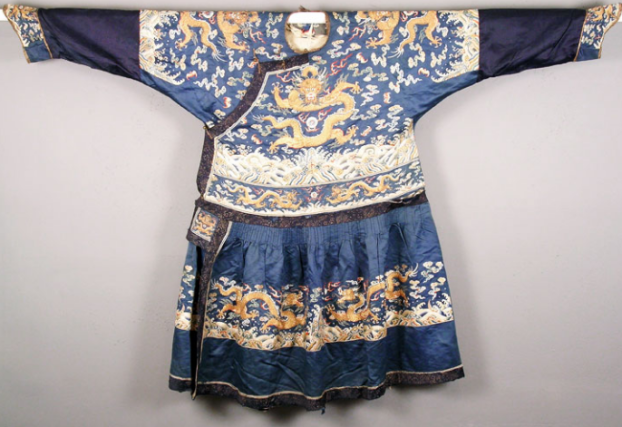 This exhibition is drawn from the museum’s extraordinary collection of over 2,700 costumes and textiles from China, Korea, Japan, India, the Himalayas and Southeast Asia.

Ceremonies and Celebrations explores interesting ideas that connect these vast regions together. The exhibition is divided into four thematic sections: the first focuses on the connection between gender and textile production and the way that textiles are used to identify gender roles in society. The second idea that is explored in the exhibition is the role of textiles as a signifier of one’s status. The third theme illustrates the unique relationship between textiles and religions across Asia. The final section looks at textiles worn or used in marking ceremonies and life transitions, including birth, weddings, and death.

Some of the highlights of the exhibition will be the imperial dragon robes worn by China’s emperors and imperial family during the Qing dynasty (1644-1911). These robes feature nine powerful dragons, the symbol of the Emperor, embroidered or woven across the front and back of the silk robes. The yellow robes were the rarest of all, since the colour yellow, symbolising the sun, was worn exclusively by the Emperor. One such yellow robe, worn by the Guangxu Emperor (1875-1908) as a boy, will be on display in the galleries.

Also included in the exhibition are magnificent whal-ot (wedding robes) from Korea, a recent gift to the museum, and Japanese kimono and kesa (Buddhist priest robes), some dating to the Edo period (1603-1868). From Southeast Asia, Indonesian ikat textiles, and pineapple-fibre, or Piña cloth from the Philippines will be on display. From South Asia and the Himalayan region, visitors can see colourful tunics and elegant silk robes from India, as well as highly meaningful and richly decorated cloth from the kingdom of Bhutan in the Himalayas.

For more information visit the website of the Pacific Asia Museum, Pasadena, California.