OATG members David and Sue Richardson are passionate about Indonesian textiles and recently have been researching the weavings of the small island of Kisar in the Lesser Sundas, to the east of Bali. As part of this research, last year they corresponded with Sonja Mohr, the curator for Insular Southeast Asia at the Rautenstrauch-Joest-Museum – Cultures of the World in Köln, about the museum’s collection of Kisar textiles. These were collected by Heinrich Kühn in 1888, Professor Alexander W. Pflüger in 1900 and Wilhelm Müller-Wismar in 1914. Sonja very kindly invited them to Köln to examine these textiles for themselves. The information gained during that visit, along with field research, has resulted in the publication of the final page on Kisar textiles on their website Asian Textile Studies. Below is their report of their trip to the museum.

Most of the visitors heading to Köln in December are there to see the Christmas markets, but we had a different objective in mind – textiles – and not just any old textiles, but textiles with excellent provenance collected on Kisar in the late nineteenth and early twentieth century.

Textile heaven! A fantastic selection of Kisar textiles ready for us to examine.

We had corresponded with Sonja Mohr for several months and she and her colleague, Senior Conservationist Petra Czerwinske-Eger, had gone to great lengths to prepare for our visit. Christian Andert, the chief storekeeper, had brought the Kisar textiles from the main storage area to one of the laboratories so that we could all examine them in detail. All of the information they held on each piece had been printed out, along with questions it was hoped we might be able to answer together.

We started by looking at the sarongs, which had been prepared for us. These were more varied than expected, with some, such as the one below, having very little ikat but lovely rich deep colours.

A simple Oirata lau which might date to the late nineteenth century.

We then looked at the ceremonial sarongs, from both the Oirata and Meher communities and discovered that one Oirata tubeskirt had been mislabelled as Meher. 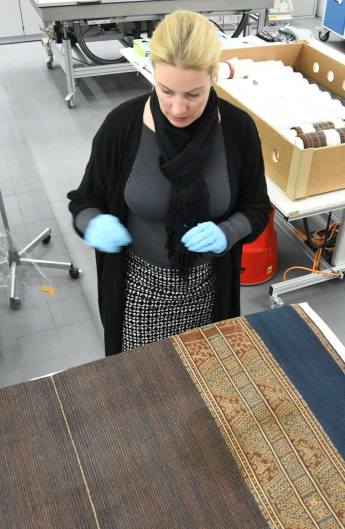 We then moved onto examining the male loincloths and it was again interesting to first see some very simple examples.

Sonja and David looking at a man’s simple loincloth.

The ceremonial loincloths collected in 1914 were just stunning – woven from fine hand-spun cotton with narrow bands of ikat and end sections of continuous supplementary weft. 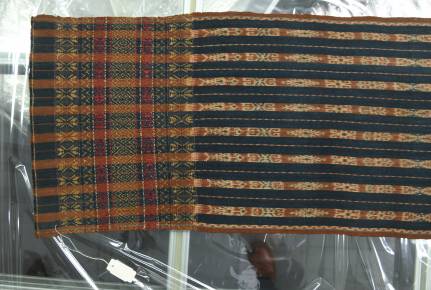 A fantastic niala or irä from Oirata, which led to much discussion.

One of the unexpected highlights for us was the collection of waistbands, which really were little gems.

Analysing waistbands collected by Müller-Wismar in 1914.

We discovered silk threads had been used in some narrow warp stripes and the twinned end band of one of these.

After two lengthy sessions we left the museum with a huge sense of satisfaction with our goal achieved, and looking forward to working together with Sonja, Petra and the Rautenstrauch-Joest-Museum – Cultures of the World in the future.

If you would like to read more about these textiles, along with many detailed photographs, please visit the Kisar page of our Asian Textile Studies website.

According to the website of the Rautenstrauch-Joest-Museum, Köln this “exhibition sheds light on the background of a globalised textile industry. It deals with the production mechanisms, economic and social aspects, but also with environmental issues. In the second part, “Slow Fashion”, the exhibition focuses on examples of more sustainable manufacturing techniques from different cultures around the world, often based on traditional knowledge and sometimes becoming popular again as deliberate countermovements.”

The Fast Fashion section of the exhibition was designed by the Museum für Kunst und Gewerbe, Hamburg in 2015 against the backdrop of the major fires in textile factories in Pakistan and Bangladesh.

OATG members David and Sue Richardson recently visited the exhibition at the invitation of Sonja Mohr, curator for Insular Southeast Asia, and give their impressions of it below.

This exhibition opens with mannequins dressed in couture clothing, positioned alongside film of catwalk shows – all very glamorous, until we see the conditions in which High Street versions of these clothes are made.

We learn of the impact of poor working conditions through images of the Rama Plaza tragedy in which a building collapsed in Bangladesh killing 900 people. Many of the clothes being made there were intended for the bottom end of the fashion market.

The worldwide impact of the demand for such products is brought home by a map showing how a pair of jeans might be made across many different countries, one process being completed in each, until they reach their final destination and are sold in Europe. However that isn’t the end of the story. When their owner has discarded those jeans, they often end up in Africa as part of the trade in used clothing.

In a similar way we learn through some strong images how slogan T-shirts, made in Africa for the US market, also end up as discarded fashion in the used clothing markets in Haiti and Africa.

The section on the impact of pesticides was also very strong, with the sad image of the shrinking Aral Sea in Central Asia.

The Slow Fashion section is compiled from the collections held by the Rautenstrauch-Joest-Museum, Köln:

To counteract all of this, the other part of the exhibition focuses on Slow Fashion, in which knowledge is passed down through the generations, artisans are valued, and the processes used to produce the textiles are often very time-consuming. This section has two strands – cloth that is produced mainly for the local market, and cloth which is being adapted for an international market.

There were several pieces from Thailand, including one from the early twentieth century, and a more recent piece woven in Sawai village, Isan Province, in this century.

As we are passionate about Indonesian textiles our eyes were immediately drawn to several pieces from Sumba. The first of these was from Kodi in West Sumba. It was a man’s hip wrapper or shoulder cloth known locally as a hanggi (hinggi in some parts of East Sumba). This was collected in 1900 and features the mamuli motif – metal mamuli are displayed right next to it. Hanggi are generally made as a matching pair and the other part was still on the loom when it was collected at the same date. This loom required many hours of conservation work by specialist Petra Czerwinske-Eger before it was ready to be exhibited.

The loom before restoration – image courtesy of Petra Czerwinske-Eger

The same loom after restoration

Next to this was a hinggi from East Sumba, featuring andung (skull trees) and horses, also collected in 1900. The final piece from Sumba was one we immediately recognised. It was from the collection of Wilhelmina de Jong and had been made by our good friend Freddy Hambuwali of Indigo Art in the last decade – but still using natural dyes. We had last seen it in the Striking Patterns exhibition at the Museum der Kulturen in Basle.

Hinggi from East Sumba made by Freddy Hambuwali (when previously displayed in Basle).

Cloths from the village of Nggela (the site of a recent devastating fire) in Flores were also on display, accompanied by a short film showing how they were made.

We had been asked by one of the curators, Sonja Mohr, to provide some quotations from weavers we know to illustrate the concept of Slow Fashion. We were delighted to see this one by our friend Theresia, the head of the Kapo Kale weaving group which has both Christian and Muslim members, displayed so prominently. She will be so proud when we take a photo of this to her when we lead a group there in May during our Tribal Weavings of the Lesser Sunda Islands Textile Tour. 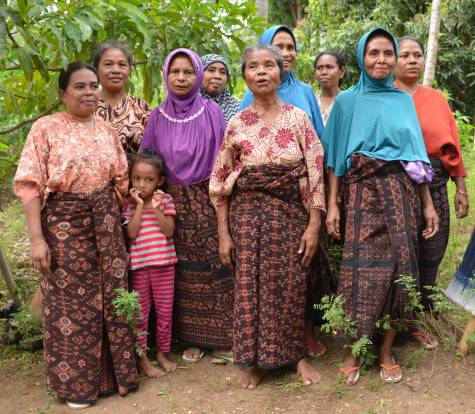 Theresia (centre) with some of the members of her weaving group

In another part of the world the wearing of locally produced cloth has a political dimension. Faso dan Fani means “woven cloth from the homeland” in Burkino Faso. The former president, Thomas Sankara, promoted the wearing of clothing made from this handwoven cotton cloth and also prohibited textile imports in the 1980s. After his assassination in 1987 this nascent industry collapsed. Since a change of government in 2015 politicians have once more started to wear this cloth and it has become fashionable again. The BBC have produced a short report on this trend, which can be viewed here.  We are reminded of the words of Sankara: “Wearing Faso dan Fani is an economic act, a cultural and political challenge to imperialism”. 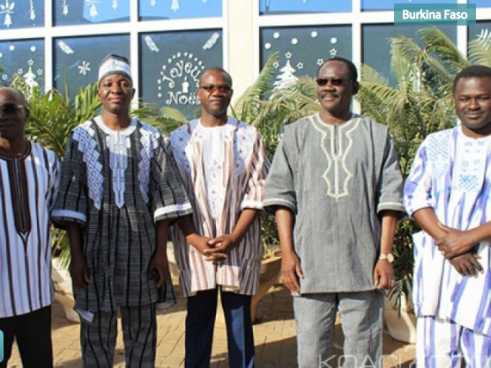 We were also drawn to the textiles produced by the Japanese company KUON, which means “eternity”, “permanence”. The company website describes how Boro means worn out or patched clothes. These have often been dyed with indigo. When clothing became worn and tatty, people mended it using the sashiko stitching technique. As they became more and more worn they were turned into floor mats and eventually into dusters. Nothing was wasted – a real contrast to the concept of Fast Fashion! “Instead of simply repairing the Boro, KUON creates new pattern from scratch, disassembles the textile into pieces, and reconstructs in order to turn it into modern fashion.” The company are working with women affected by the Great East Japan Earthquake of 2011. Textiles are being revitalised using sashiko and patching and the fabric is then used to make new garments – each imbued with a sense of history.

A sample of Boro fabric from the KUON website 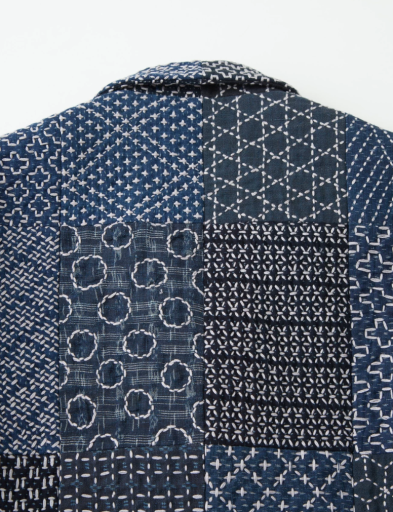 A sample of sashiko stitching from the KUON website

This exhibition, which ends on 24 February,  is well worth a visit, particularly if you combine it with a visit to the museum’s permanent exhibition Man in his World.