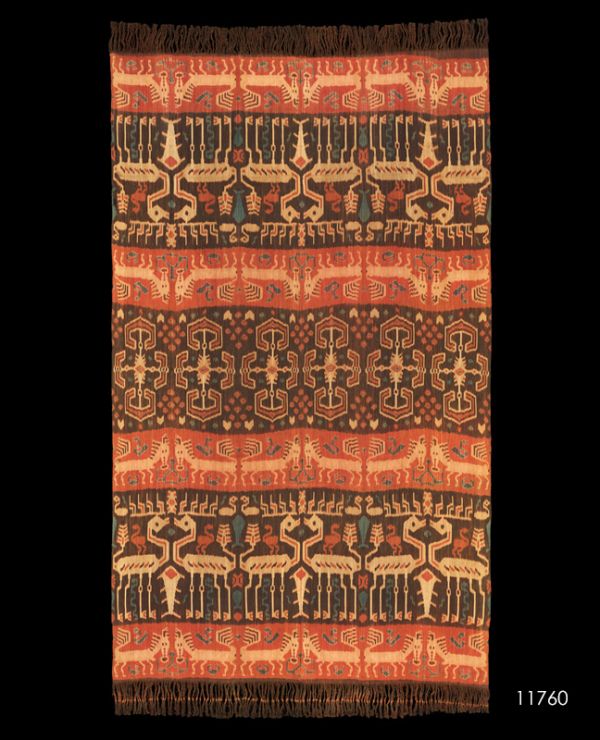 Exhibition dates: this is an online exhibition, available to view indefinitely

A special exhibition of textiles from Sumba, curated by HALI contributing editor Thomas Murray and drawing from his extensive collection, is available to view online. It begins:

“The island of Sumba may be found on a map between Bali and New Guinea but it exists in its own world, far apart from those antipodal lands. Divided east and west by language and environmental conditions, the west tends to be more wet and green and the east, dryer.

Sumbanese religion, Marapu, recognizes that a dualistic symmetry exists in the universe, that of male and female, hot and cold, sun and moon, cloth and metal. Here there are good and bad spirits hovering nearby, needing ritual offerings on a regular basis. The ancestors must most especially be cared for.

Sumba is thus home to one of the strongest animistic tribal societies found in Indonesia, perhaps most famous for its notorious custom of cutting off the heads of enemies and placing them on the branches of a designated tree, the pohon andung, at the entrance of the village. Such trees represented the Tree of Life as well as serving to remind viewers of the power of the raja.

Sumba has a rich megalithic heritage, featuring giant stone tomb memorials. Sumbanese houses, particularly the customary houses found in royal villages, known as rumah adat, are understood to be cosmic diagrams, with the underworld of the animals below, the mid-level for human habitation and the high roof being the realm of the ancestors. This is also the place where the pusaka heirloom treasures are stored, to be closer to the departed souls; precious gold jewelry and fabulously rare and beautiful textiles were kept just under the peak of the roof on both sides of the island. But the art of weaving and dyeing achieved greatest heights in the east, with ikat textiles adding bright colors to the dusty brown background of this, the dry side of the island.”

Hmong Songs of Memory, Hmong Threads of Life, an absorbing multi-media exhibition of photographs, film, artefacts and textiles amassed by researcher and musician Victoria Vorreiter, offers visitors the opportunity to explore the age-old music, ceremonies and beliefs of the mountain-dwelling Hmong of Southeast Asia. The event, which marks the launch of Vorreiter’s book and ethnographic film, Hmong Songs of Memory: Traditional Secular and Sacred Hmong Music, will especially highlight collections of Hmong musical instruments and Hmong clothing representing four subgroups.

The exhibition is being held at Tamarind Village, Chiang Mai, Thailand. 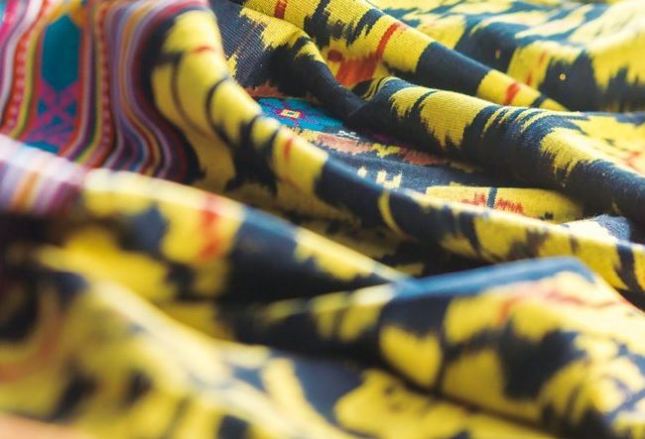 In eastern Indonesia and Timor-Leste people wear hand-woven, decorative ikat cloths as a mark of prestige and to flaunt their taste for fashion at festive events. Ikat is a form of art in which the yarn is tied and dyed – the Indonesian term ‘ikat’ means ‘to tie’ – before weaving. Woven into the patterns are myths, rituals, recent historical events, imported motifs as well as new fashion trends. Ever since they began producing ikat, weavers have incorporated foreign influences. Relying on old pieces from the museum’s exceptional collections as well as new cloths, including contemporary interpretations by Ito Joyoatmojo and Susi Kramer, the exhibition Striking Patterns: Global Traces in Local Ikat Fashion illuminates the development of the tradition, illustrating how these highly skilled weavers have already long been part of the process of globalization.

Become enthralled by beautiful shoulder cloths, hip wraps and sarongs! This exhibition unfolds a sea of flowers. In particular, the Indian eight-pointed flower features in almost endless variations, accompanied by a rain of European roses. Animals populate the cloths, just as tourists do. We also find Catholic motifs in the shape of crucifixes and angels, while synthetic yarns and bright
colours lend some of the exhibits a radiant touch of modern fashion.

This exhibition is accompanied by a catalogue, published in German and English.

For more information, visit the website of the Museum der Kulturen, Basel, Switzerland.

Pua kumbu are magnificent, intricately dyed, hand-loomed cotton ikat textiles once woven as religious objects par excellence by the Iban and the related Dayak peoples who produced them in Southeast Asia. They were said to be full of powerful spirits and designed to be extraordinarily beautiful to attract the attention of the gods and invite them to draw near to human ceremonies. Over decades, emeritus Tufts University engineering professor John Kreifeldt amassed a comprehensive collection of pua kumbu, sungkit wraps and kain kebat skirts from Sarawak and West Kalimantan, with examples from the 1800s to 1940. Kreifeldt is the primary lender and a collaborator on this exhibition at the College of the Holy Cross in Worcester, Massachusetts; other than a few textiles, most have never been displayed before in any museum.

For more information, visit the website of the College of the Holy Cross, Massachusetts, USA. 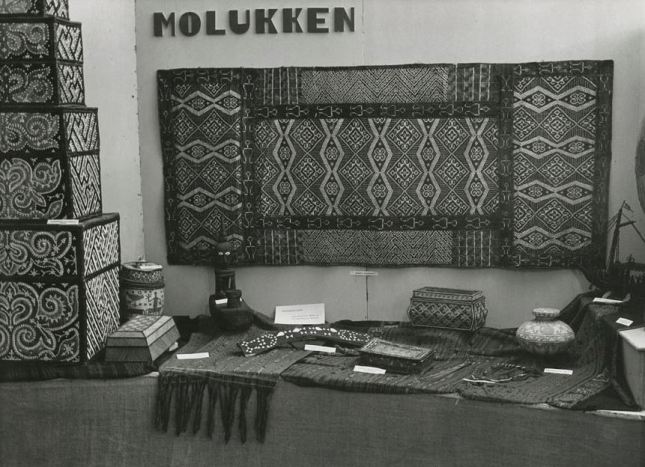 Today’s Textile Tidbit is re-sharing a link to some fantastic photographs that Pamela, OATG’s website manager, recently shared on her Tribal Textiles forum. US-based textile dealer and HALI editor, Thomas Murray, has made available several hundred (or possibly thousand?) historical photographs, mostly of southeast Asian textiles, on his website. The photos were taken by a number of different photographers, but all are now in Murray’s collection, and he has scanned and uploaded them to the web. The image above is of an exhibition at the Tropen Museum from the Laurens Langewis collection. I highly recommend browsing through some of these pictures for yourself.

A while ago, I was pointed in the direction of a series of eight fascinating videos on the website of the Fowler Museum at UCLA. The second interview with a weaver from Timor Leste was particularly recommended to me and I thoroughly agreed. It is very moving with great filming and English subtitles, and gives a real connection to the meaning of a textile. The film on Ndona, Flores is also excellent. It shows the tying of ikat, the dyeing and weaving … and so much more. I found the films to be quite compulsive!

The press release on the exhibition (curated by Roy Hamilton, the Fowler Museum’s curator of Asian and Pacific collections) to which the videos relate, says:

‘In Weavers’ Stories from Island Southeast Asia, weavers and batik artists speak for themselves in videos produced at eight sites in Indonesia, Malaysia, the Philippines and East Timor. What motivates women to create new patterns? How do they adjust to changing social and economic situations?

‘A panoply of human emotions and experiences – determination, longing, dream inspiration, theft, war and more – emerge from the stories of these remarkable women. In one video, for example, a weaver in Tutuala, at the far eastern tip of Timor, describes how she designed a cloth pattern by copying the skin of a snake. She recounts that this “snake cloth”, now served by the snake spirit, became an object of such power that when one was stolen during a militia rampage in 1999, the snake destroyed all the coconut trees in Baucau in revenge. Another weaver tells of learning weaving patterns from her deceased mother, an expert weaver, when her mother visits her in dreams.

‘These seven- to ten-minute oral histories include interesting footage of daily life with extended families and the interplay of generations, detailed looks at weaving and dyeing techniques, and unique celebrations, such as a wedding in a sultan’s palace. Textiles created by the featured weavers and batik makers accompany each video.’

Particularly interesting is the fact that the last video is all about Lang Dulay, a famous weaver from Mindanao in the Philippines, who died earlier this year. You can read more about her in a thread on Pamela’s forum, Tribal Textiles.