Last year Karen Horton talked to OATG members about her work conserving the thangka at the Chester Beattie library. As that was so well received I thought members might be interested in this online talk by Ann Shaftel on a similar topic. It takes place on Thursday 17 September at 1730 Mumbai time (1300 in the UK). To register for this event please follow this link.

“Thangka preservation is as complicated as the thangka form itself, a complex composite artform spanning centuries and continents, and still evolving….. This talk will include important fundamental points of the thangka form, history, purpose, preservation and evolution and complexities of preservation of the sacred”. The Museum Society of Mumbai. 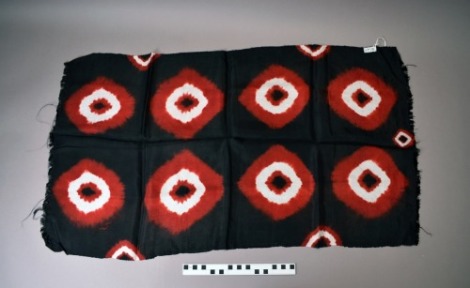 The next thing that caught my eye was this blog by Multaka, Oxford. In it Joanna Cole looks at some of the connections between a collection of photographs taken by Jenny Balfour-Paul in Yemen in the 1980s and some of the objects donated by her to the Pitt Rivers Museum. Joanna gives examples of this veil from Sana’a and a photograph of women wearing similar veils. However my favourite example is that of the woven camel muzzle. Seen out of context it isn’t very exciting, but the photograph showing how it was used really brought it to life. 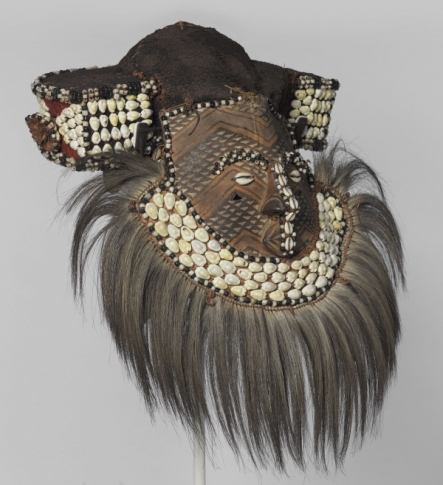 Another museum that has now reopened is the Brooklyn Museum. Their current exhibition is entitled African Arts – Global Conversations. The exhibition takes a “unique transcultural approach [which] pairs diverse African works across mediums with objects from around the world. By considering how shared themes and ideas—such as faith, origins, modernism, and portraiture – developed independently in different parts of the globe, it offers new theoretical models for discussing African arts in relation to non-African arts. Moving beyond the story of European modernists’ so-called “discovery” of African arts, it fills in the blanks in decades of art history textbooks” Brooklyn Museum website. 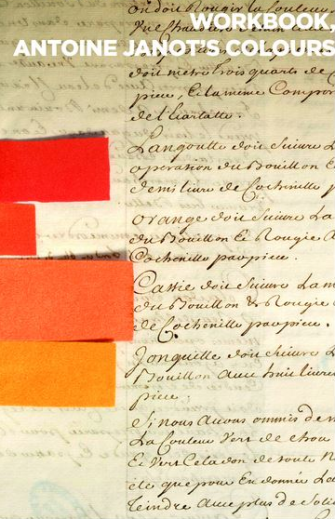 “This workbook is a bilingual publication in both French and English. It presents the palette of colours produced by Antoine Janot, a French master-dyer of the 1st half of the 18th century who owned  an important dyeing business in the south of France, specialising in wool broadcloth exported to the Levant. Janot wrote treatises on dyeing illustrated with dozens of dyed textile samples.” Dominique Cardon 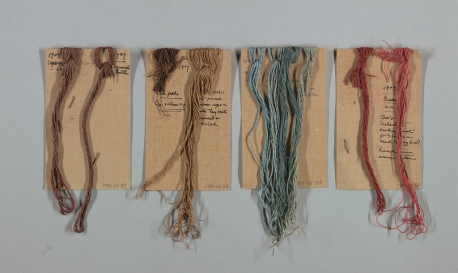 Another expert on natural dyes, Elena Phipps, recently wrote this article on the dye record cards produced in the 1890s by an embroidery collective based in Deerfield, Massachusetts. “these dye cards show the Deerfield embroiderers experimenting with dyestuffs that had been used for millennia…. They reflect a different type of historic preservation effort – one focused on recovering and retaining fading knowledge of the art of dyeing.” Elena Phipps

A sample sheet or montre showing the colours of broadcloth produced.

This use of record cards reminded me of another book by Dominique Cardon – The Dyer’s Handbook: Memoirs of an eighteenth century master colourist. In it she examines a manuscript written in the late eighteenth century by a clothier involved in the export trade from the Languedoc area of France to the Levant. She provides a great deal of context, both economic and political, as well as the expected technical analysis of the dyes and weave structures. You can get a flavour of her work from this article, written for Cooper Hewitt in 2017.

Finally, those of you who missed the talk on the Textile of Japan by Thomas Murray will be glad to hear that it was recorded and will be made available online at a later date.

This two-day seminar at the University of San Francisco Center for Asia Pacific Studies – with lectures, site visits, and receptions—will provide a rare opportunity for the hands-on study of Himalayan thangkas. Participation by scholars, artists, museum professionals, art conservators, Buddhist community members, art collectors, and university students is welcomed. The programme will include close study of thangkas with lectures, group discussions, and curated visits to local temples and museums.

The work of art conservator and cultural emissary Ann Shaftel is at the forefront in the field of thangka conservation worldwide.  USF will share her over four decades of experience working with museums, as well as the monasteries and repositories of the Himalayan world community. In addition to her conservation practice, Ann is a renowned teacher of international workshops to disseminate knowledge for the conservation of sacred arts in the US, Canada, Europe, Bhutan, Nepal, India and China. She is a Fellow of the American Institute for Conservation, and Fellow of the International Institute for Conservation.