This July a series of textile-related events will take place in Leiden, the Netherlands.

The 11th International Convention of Asia Scholars runs from 16-19 July 2019. Participants from over 60 countries, covering a multitude of disciplines, are expected to attend. Registration details for ICAS can be found here. Please note there is a significant discount for early registration and this ends on 15 March 2019.

As part of this Convention the Tracing Patterns Foundation are organising several Textile Panels around the subject Fibre, Loom and technique. Fifteen researchers will present their findings on a variety of subjects. These include our founder Ruth Barnes on Early Weft Ikats found in Sumatran Textiles and OATG member Chris Buckley on The Origin of Chinese Drawlooms. Itie van Hout, whose book on Indonesian Textiles at the Tropenmuseum was recently reviewed in Asian Textiles will speak about Twill Weaving in Kalimantan and Sandra Niessen will give a presentation on the Bulang of the Batak people – which Pamela Cross spoke of with such passion at our recent Show and Tell.

Although several of the talks are on Indonesian textiles, other areas covered include the Philippines, Egypt, Laos, China, India and Africa.

From 13-19 July the Textile Research Centre (also in Leiden) is organising a special Asia Week on the theme of East-West connections. This will include an exhibition, workshops and lectures. The exhibition, entitled Out of Asia: 2000 years of fascination with Eastern textiles, aims to show “how economics and trade have played an essential role in the movement and use of textiles” and will present a range of textiles, from Indian block-printed textiles from the thirteenth century to regional Dutch textiles from the early twentieth century. 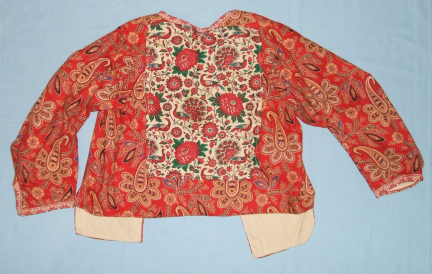 Back of a woman’s blouse from the Dutch island of Marken, with a panel with a chintz-style decoration with peacocks and buteh, 1937. © Textile Research Centre

The workshops will include Indigo Printing and Dyeing with Georg Stark (read my earlier blog on him here), Analysing Ancient Textile Fragments with Affordable Equipment, and Embroidery from Afghanistan.

Full details of the talks and workshops, along with registration details, can be found here – please note spaces are limited.

Obviously a visit to Leiden would not be complete without spending time in the Museum Volkenkunde, where you are greeted by a huge totem pole as you enter the museum. Its collection is vast and it seeks to convey through universal themes that “despite cultural differences, we are all essentially the same”.

Part of the Indonesia Gallery display at the Museum Volkenkunde

A short train ride (around 40 minutes) will take you to Amsterdam where you can visit the Tropenmuseum.

It’s easy to travel to Leiden from many parts of the UK – just fly to Amsterdam (Schipol) and get the train from there (15 minutes), or take the Eurostar to Amsterdam. See you in Leiden!