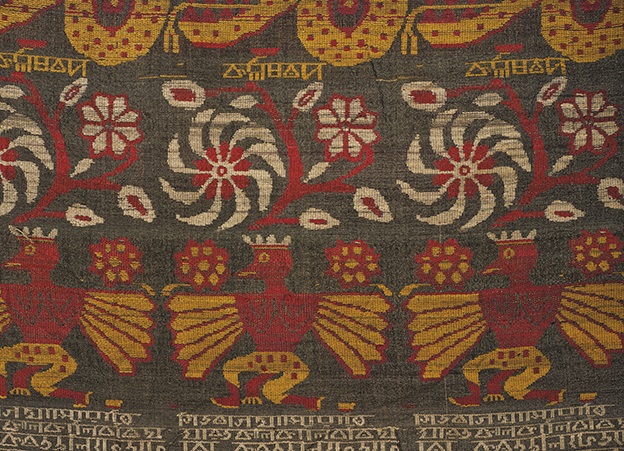 Discover a little-known chapter of Indian history through the largest surviving example of an Assamese devotional textile, the ‘Vrindavani Vastra’.

The Vrindavani Vastra (literally ‘the cloth of Vrindavan’) was produced in Assam in north-eastern India sometime in the late seventeenth century. It is made of woven silk and figured with scenes from the life of the Hindu god Krishna during the time he lived in the forest of Vrindavan. It was made to be used in the Krishna cult which developed following the ministry of the Assamese saint Shankaradeva (d. 1568).

At over nine metres long, this Assamese textile is the largest of its type to survive. It is made up of twelve strips, all now sewn together. The Krishna scenes on the textile are from the tenth-century text the Bhagavata Purana, and are elaborated in the dramas of Shankaradeva. A verse from one of these is also woven into the textile, using immensely sophisticated weaving technology, now extinct in India. Following its use in Assam the textile had a second history in Tibet. It was found there by Perceval Landon during the Younghusband Expedition sent from British India to Lhasa in 1903–1904. Landon, a friend of Rudyard Kipling, was the correspondent from The Times on the expedition, and he gave the textile to the British Museum in 1905.

For more information, visit the website of the British Museum, London.